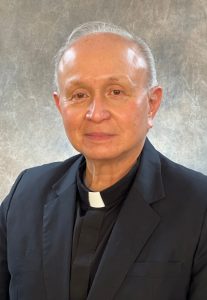 He attended /Ateneo/de Manila University in/Quezon/City, Philippines, from 1967-1971, and Cardinal Stritch University/in Milwaukee, Wis., from 1984 to 1986. He also attended Sacred Heart School of Theology in Hales Corners, Wis., from 1983 to 1986, and the Pontifical Urban University in Rome from 1987 to 1993. He received a Master of Divinity and doctorate in canon law.

Father Lacson came to the United States in 2002 to serve at/Walter Reed Medical Center in Washington, D.C. He went on to serve at St. Bernard Parish in Levitttown N.Y.; Our Lady of the Valley in Napa, Calif.; and Siena Hospital in Las Vegas.

In the Diocese of Wheeling-Charleston, Father Lacson was chaplain of Wheeling Hospital from 2013 to 2015. He was then appointed administrator of St. Peter Parish in Welch, Sacred Heart Parish in Powhatan, Our Lady of Victory Parish in Gary, and Christ the King Parish in War (all in West Virginia) in 2015. He was appointed pastor of these parishes on July 13, 2016, and served there until June 19, 2019, when he was appointed assistant priest in residence in
Harrisville, W.Va., serving the Parish of St. John’s in St. Marys, W.Va., and Christ Our Hope Mission in Harrisville. In 2020 he was appointed administrator of Ss. Peter and Paul Parish in Oak Hill.

Father Lacson became a U.S. citizen in 2005. He was a member of the National Association of Catholic Chaplains and served 10 years as a hospital chaplain.

Online condolences may expressed at www.tyreefuneralhome.com

Arrangements were made by Tyree Funeral Home, Oak Hill.

Mrs. Gemma White
Kindergarten Teacher
gwhite@ssppcatholic.org
Gemma White has been teaching for twenty-eight years. Her passion for teaching and the energy she exudes is evident in her classroom.

Mrs. Claudia Kania
PK Teacher
ckania@ssppcatholic.org
Claudia Kania has been teaching preschool for five years. She loves working with her three and four-year-olds and incorporates Montessori activities into her curriculum.